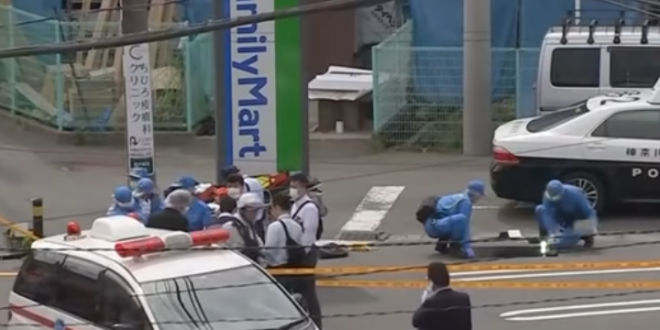 A man carrying a knife in each hand and screaming “I will kill you!” attacked a group of schoolgirls and adults just outside Tokyo on Tuesday, killing two and injuring 16 others, officials said.

Most of the victims were children who were lined up at a bus stop near Noborito Park in the city of Kawasaki when a man in his 50s began slashing them with knives. Quoting police, city officials said that the suspect was captured but died from a self-inflicted cut to the neck.

Witnesses described a hellish scene: Children and adults falling to the ground, some with their shirts soaked with blood. Dozens of children running and screaming for help, with their school bags and books scattered on the ground.

Kanagawa Prefectural Police officials said many of the victims, who were waiting at a school bus stop in Tama Ward about 250 meters northwest of Noborito Station, are students from Caritas Elementary School, a private Catholic school in the same ward.

They said the suspect, who was wearing glasses, a black shirt and pants, slowly approached the girls and attacked them with knives in both hands. Authorities had earlier said they found two knives at the site that appeared to have been used in the attack.

U.S. President Donald Trump, who was wrapping up a state visit to Japan, offered his “prayers and sympathy” to the victims as he met troops outside Tokyo on the final day of his trip. Standing aboard a Japanese military ship, he said that “all Americans stand with the people of Japan and grieve for the victims and for their families.”

Right wingers are predictably flooding social media to mock gun control. In 2017 Japan had only a handful of gun deaths. In the US that year the total was nearly 40,000.

“All Americans stand with the people of Japan and grieves for the victims and for their families.”

Pres. Trump offers condolences to victims of stabbing at bus stop near Tokyo that killed two people and injured at least 16. https://t.co/AY8xp0oVVS pic.twitter.com/BbYthRzZ7D

Previous CHATTER AWAY: Overnight Open Thread
Next Franklin Graham To Hold Day Of Prayer Against Trump’s Enemies: No President Has Been So Attacked [VIDEO]