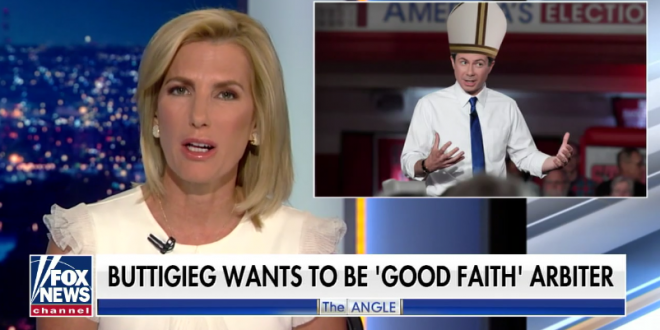 Ingraham: “Pope Pete” Is A Mild-Mannered Extremist Trying To Condescend His Way To The Nomination

“Beyond his Boy Scout demeanor and Mayor Pete shtick, Buttigieg is but another creation of a media apparatus desperate to oust Trump. And as I’m sure you saw again and again and on the other networks, he showed this unattractive strain last night. But it is hard to patronize and condescend your way to win the nomination. You can’t do it. You have to treat the people like they deserve to be treated. Forget Mayor Pete, maybe we should call him Pope Pete. Don’t you love how because Pete attends church, we are to treat him like the be-all and end-all moral authority, the arbiter or of who is and who is not operating in good faith.” – Laura Ingraham, on last night’s show.

Laura Ingraham wants Pete Buttigieg to come on her show so she can ask him about his “father’s Marxist pedigree,” tell her about the “glories of socialism that family members, maybe your dad, championed” and whether he was “steeped in them at home” pic.twitter.com/TOtnntHBjM

Very interesting: Buttigieg uses his Fox News town hall to call out Tucker Carlson and Laura Ingraham – by name – for comments they have made.

"There is a reason why anyone has to swallow hard and think twice" before going on Fox, he says.