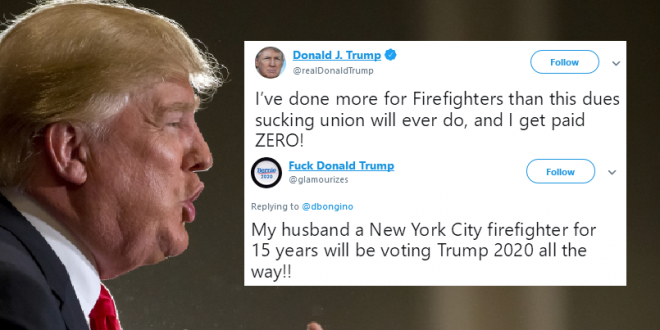 In Predawn Frenzy Trump Retweets 60 Firefighters, Including One Who Changes Name To “Fuck Trump”

Donald Trump went on a wild retweet frenzy Wednesday morning, sharing 60 apparently supportive messages from firefighters after a prominent union announced its endorsement of former Vice President Joe Biden. The retweet rampage was unusual in itself, but the twist came when one of his supposed supporters changed their username to “Fuck Donald Trump.” The username was then still proudly displayed on Trump’s Twitter page.

I’ve done more for Firefighters than this dues sucking union will ever do, and I get paid ZERO! https://t.co/Tw0qwTiUD6

Im a firefighter and im NOT voting for Joe.

This fire family does NOT support Joe Biden for President. #TRUMP2020🇺🇸

My husband a New York City firefighter for 15 years will be voting Trump 2020 all the way!!