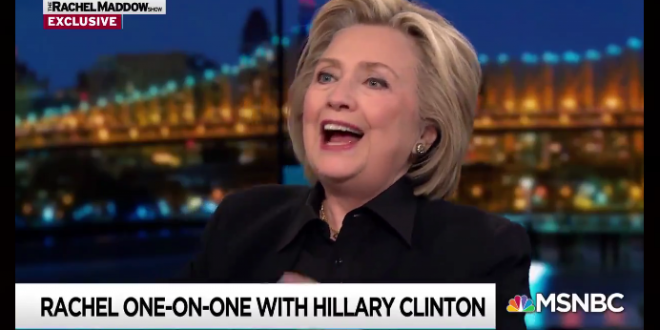 “Imagine, Rachel, that you had one of the Democratic nominees for 2020 on your show and that person said, ‘You know, the only other adversary of ours who is anywhere near as good as the Russians is China,'” Hillary Clinton said last night during an interview with MSNBC’s Rachel Maddow.

“‘So why should Russia have all the fun? And since Russia is clearly backing the Republicans, why don’t we ask China to back us?'” Clinton continued as the hypothetical Democrat. “‘And not only that, China, if you’re listening, why don’t you get Trump’s tax returns? I’m sure our media would richly reward you.’”

Here is Hillary Clinton’s hypothetical about a candidate calling on China to hack Trump’s taxes, and why Republicans putting partisanship over national security is a dangerous thing. pic.twitter.com/AIjJYRiTfE