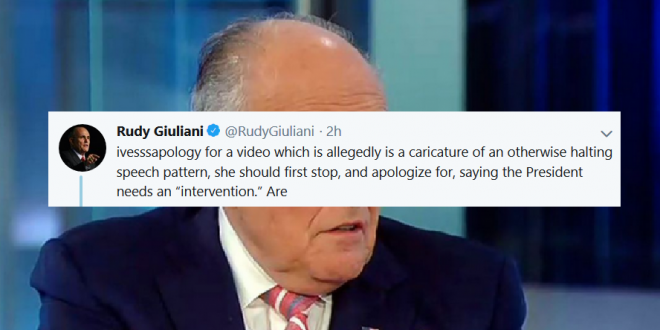 Trump lawyer Rudy Giuliani fired off a head-scratching tweet Friday morning after taking heat for posting a doctored video of House Speaker Nancy Pelosi. On Thursday, Giuliani joined President Trump in sharing a doctored video that appeared to show Pelosi slurring her speech. “What is wrong with Nancy Pelosi?” wrote Giuliani, who has since deleted the tweet with the Pelosi video

ivesssapology for a video which is allegedly is a caricature of an otherwise halting speech pattern, she should first stop, and apologize for, saying the President needs an “intervention.” Are pic.twitter.com/ZpEO7iRzV8

Good luck to the reporters attempting to describe this in a news article. pic.twitter.com/aUdOkt4JrJ

What is even going on with this tweet. From the opening word(?) to the trailing “Are” to the basketball gif. I am so confused. https://t.co/62NDEXkkss

Boy, you sure have proved Nancy has speech problems by stuttering so bad you stutter when you tweet.