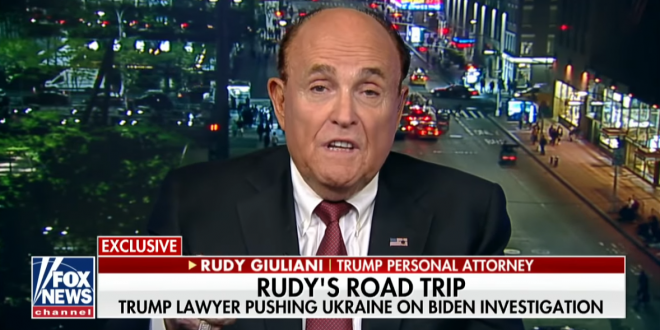 Rudy Giuliani has said his controversial planned visit to Ukraine will not go ahead, because of concerns about who he would be meeting.

Earlier this week, the former New York mayor who is now an attorney for Donald Trump said he planned to push Ukraine to pursue investigations he hoped could benefit the president politically.

But on Friday night Giuliani told Fox News he would not go to Kiev after all, because he would be “walking into a group of people that are enemies of the president … in some cases enemies of the United States”.

The change of plans came as advisers were urging the incoming Ukrainian president, Volodymyr Zelensky, a comedian and political newcomer, not to meet with Mr. Giuliani, according to a person familiar with the conversations.

The trip raised the specter of a lawyer for Mr. Trump pressing a foreign government to pursue investigations that his allies hope could help him win re-election.

And it comes after Mr. Trump has spent more than half of his term facing scrutiny about whether his 2016 campaign conspired with Ukraine’s hostile neighbor, Russia. Mr. Giuliani had planned to leave on Sunday.