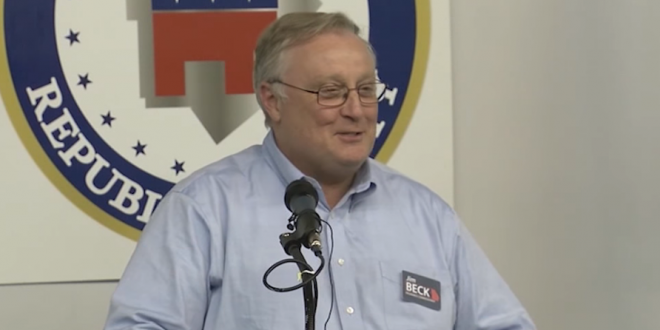 Georgia Insurance Commissioner Jim Beck was accused today by a federal grand jury of stealing more than $2 million from his former employer.

The 38-count indictment charges Beck, an ex-insurance lobbyist and long-time leader of the Georgia Christian Coalition, with fraud and money laundering in an elaborate scheme to defraud the Georgia Underwriting Association.

With the stolen cash, the Republican allegedly paid his credit card bills and taxes — and even funded the 2018 campaign that landed him in office. Beck funneled money to himself through two Carrolton-based companies he controlled, the Georgia Christian Coalition and Creative Consultants, the indictment alleges.

Jim Beck was visibly nervous when he entered the courtroom, shuffling to the defense table in shackles and handcuffs. He turned himself in to authorities early Wednesday morning. #UpLateATL https://t.co/whQLLmQeuS

.@GeorgiaDemocrat chair @NikemaForSenate calls for Republican Insurance Commish Jim Beck to step down after fraud charges: “He has zero credibility to continue in his role, and should resign immediately.” #gapol pic.twitter.com/hxD2BPE4I7