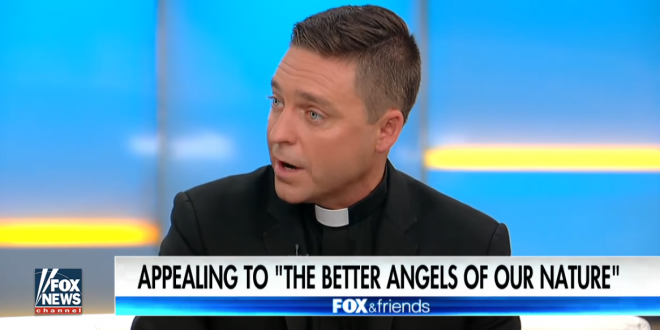 From the Catholic news site Crux:

Father Jonathan Morris, a former member of the Legion of Christ who was at one time among the most prominent Catholic priests in America as a contributor to Fox News, has asked to be dismissed from the clerical state, indicating he wants to be free to “marry and have a family” though saying it’s not about an “existing relationship.”

“After taking some months of sabbatical to be with family and to dedicate more time to prayer and retreat, I have decided to ask the Holy Father, Pope Francis, to release me from the duties and responsibilities of the clerical state,” Morris said in a statement, which he made available to Crux.

Morris left the troubled Legion of Christ in 2009, three years after the Vatican suspended its founder, Father Macial Marciel, from his priestly duties, having found Maciel guilty of various forms of sexual abuse and misconduct as well as abuse of power. Morris was incardinated into the Archdiocese of New York with the support of Cardinal Timothy Dolan.

He [Morris] argued that atheists couldn’t be trusted as president because we didn’t fear “eternal consequences.” He got mad when atheists held a Reason Rally because we were “trying to thwart other people’s belief systems” (something right-wing Christians never, ever, ever do). He even said babies might die in a natural disaster as part of God’s Divine Plan. Well guess what? He’s quitting the priesthood because he really wants to have sex.