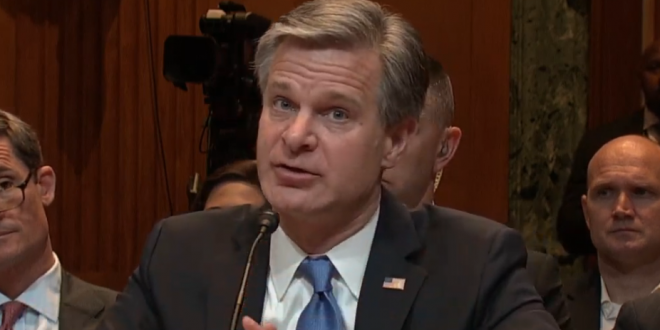 FBI Director Pushes Back On Bill Barr’s “Spying” Claim: I Don’t Have “Any Evidence” Of Illegal Surveillance

FBI Director Christopher Wray told a Senate panel Tuesday that the bureau is “working to help” Attorney General William Barr as he reviews the origins of the Russia investigation, but distanced himself from Barr’s use of the phrase “spying” at a separate hearing last month. “Well, that’s not the term I would use,” Wray said.

FBI Director Christopher Wray pushes back on Bill Barr’s use of the loaded term “spying” to describe investigation of Trump campaign.

“That’s not the term I would use… to me the key question is making sure it’s done by the book, consistent with our lawful authorities.” pic.twitter.com/65HI19vzIa

“That’s not the term I would use,” Wray responds.

BUT he says “different people use different colloquial phrases.”

SHAHEEN: Do you have any evidence of illegal surveillance in the 2016 campaign?

WRAY: “I don’t think I personally have any evidence of that sort.”