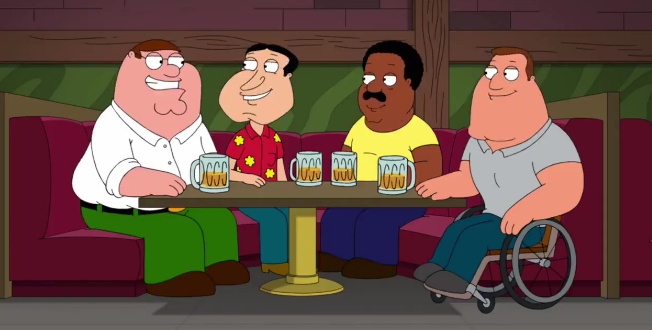 Fox’s Family Guy went after Fox News Channel’s Sean Hannity in an hilarious riff describing what he looks like or reminds one of. The characters voice a long series of jokes while Hannity’s face is on screen in the clip below. Here are the first few:

CLEVELAND: “I’m seeing Mr. Doubtfire.”
PETER: “High sodium Superman?”
JOE: “He looks like an angry face drawn on a thumb.”
QUAGMIRE: “The richest guy at Rite Aid?”
CLEVELAND: “Or the mayor who won’t close the beaches in Jaws.”
JOE: “Wreck-It Ralph at a job interview.”

My favorite is “strip club lunch regular.” This week the show also went after actor James Woods, calling him “a political troll and a maniac on Twitter.” It appears that the show’s James Woods High School will now be called Adam West High School, after the late actor who regularly appeared as Quahog’s befuddled mayor.

Previous Franklin Graham: “Rise Up” Against Gay Cartoon Rats!
Next Trump Chewed Out Larry Kudlow For Admitting That US Consumers Pay His Tariffs, Not China’s Government