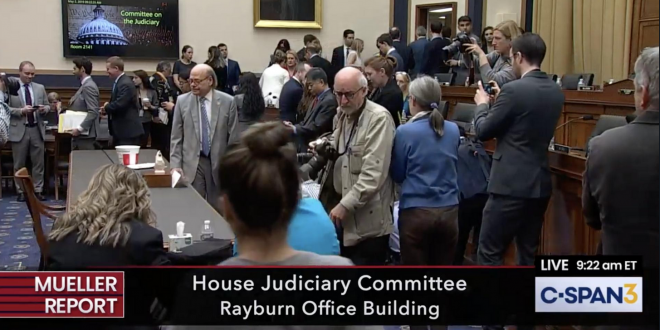 Rep. Steve Cohen (D-TN) brought props to the House Judiciary Committee hearing that Attorney General William Barr cancelled on: a ceramic chicken and a jumbo bucket of KFC. The spin House Democrats want to convey is clear: that Barr is too scared to appear for questioning on his handling of Special Counsel Robert Mueller’s investigation and report. Rep. Jerry Nadler, the chairman of the House committee, said Wednesday night that Barr was “terrified.”

.@RepCohen brought a plastic chicken and a bucket of Kentucky Fried Chicken (which he is tucking into ahead of this 9AM House Judiciary hearing.)

“He’s here,” Cohen said, pointing to the chicken and referring to AG Barr who is not attending after a grilling in the Senate. pic.twitter.com/bGz3HCRSCQ

WATCH: Rep. Steve Cohen (D-TN) brings out a chicken statue and places it in front of empty seat where Attorney General William Barr would have sat for the House Judiciary Committee hearing https://t.co/GB1CXMt4Nw pic.twitter.com/vApWmEWpQf

“Chicken Barr should have shown up today and answered questions,” Rep. Steve Cohen (D-TN) says, as he holds up a chicken statue. https://t.co/GB1CXMt4Nw pic.twitter.com/rHaJ6dvtRw