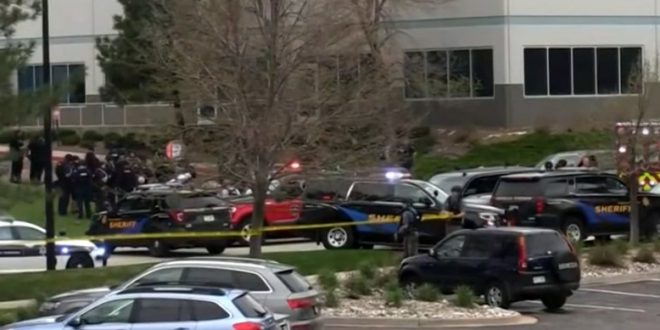 One student is dead and eight others injured after two of their classmates opened fire at a suburban Denver STEM school on Tuesday.

Superintendent Thomas S. Tucker said in a letter to parents that STEM School Highlands Ranch, a public charter school with more than 1,850 students in kindergarten through 12th grade, will be closed for the remainder of the week.

“This is a terrible event,” Douglas County Sheriff Tony Spurlock said. “This is something that nobody wants to happen in their community.” Two shooting suspects are in custody. One is an male juvenile and the other was identified by police as Devon Erickson, 18.

Police tape was strung up outside the prim brick suburban home where neighbors said Mr. Erickson’s family has lived since the late 1990s. A next-door neighbor who declined to be named described him as a quiet young man who sometimes deflected eye contact and played several musical instruments.

“I can tell you that there were shots fired,” he said. “Our officers went in and engaged the suspects. We did struggle with the suspects to take them into custody.”

A high school senior who plans to become a Marine after graduation was among the students who tackled a gunman in a Colorado school on Tuesday.

Brendan Bialy attends the STEM School Highlands Ranch, which is not far from the site of the Columbine High School shooting 20 years ago.

Bialy’s father, Brad, confirmed to NBC News that the teenager and other classmates tackled and disarmed one of the two shooters. The incident came just under a week after two people were killed and four others injured in a shooting at the University of North Carolina at Charlotte.

Previous CHATTER AWAY: Overnight Open Thread
Next Trump: I Reported Business Losses As A “Sport”