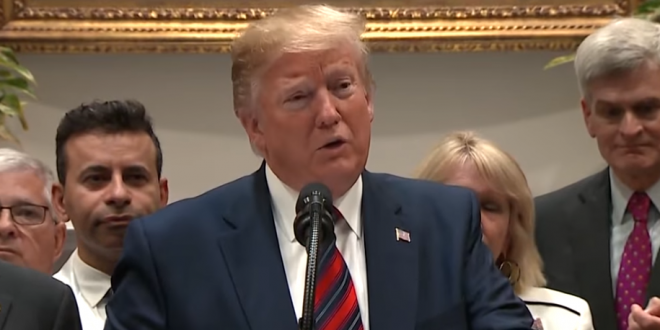 China Calls For “People’s War” Over $300B In US Tariffs

U.S. officials are targeting a $300 billion list of additional Chinese imports including laptop computers for tariff hikes, ratcheting up a trade fight that is shaking financial markets and fueling fears about global economic growth.

The release followed Beijing’s announcement Monday of tariffs of up to 25% on $60 billion of American imports in their spiraling dispute over Chinese technology ambitions and other irritants.

The list of 3,805 product categories is a step toward carrying out President Donald Trump’s May 5 threat to extend punitive 25% duties to all Chinese imports, the U.S. Trade Representative announced. It said a June 17 hearing would be held before Washington decides how to proceed.

The US-China trade war continues to heat up, with Beijing calling for a “people’s war” against Washington and President Donald Trump threatening to impose tariffs on another $300 billion worth of Chinese goods.

In a series of editorials and op-ed articles published Monday, Chinese state media slammed what it labeled the Trump administration’s “greed and arrogance” and called for a “people’s war” against it. Beijing’s state-run media effectively serves as a mouthpiece for the Communist Party.

“The most important thing is that in the China-US trade war, the US side fights for greed and arrogance … and morale will break at any point. The Chinese side is fighting back to protect its legitimate interests,” the nationalistic Global Times tabloid wrote in a Chinese-language editorial carried by Xinhua News Agency.

Previous Trump: “Patriot Farmers” Will Benefit From My Tariffs
Next Mayor Pete Slow Jams The News With Fallon [VIDEO]