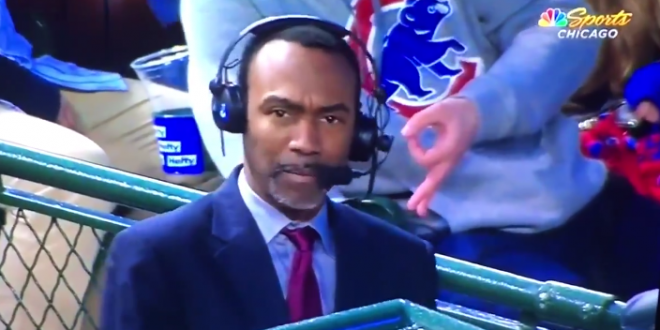 The Chicago Cubs have indefinitely banned a fan from Wrigley Field after he made what appeared to be a “white power” symbol behind a black reporter during Tuesday’s broadcast.

Crane Kenney, the team’s president of business operations, said in a statement Wednesday night that an investigation concluded that the fan had violated the Cubs’ long-standing guest code of conduct.

The hand gesture seen in the video is similar to the symbol for the “OK” sign, a gesture that has become popular in recent years among far-right extremists and white supremacists who use it to make the letter shapes for “w” and “p,” which stand for “white power.”

The “okay” hand gesture as a symbol of white intolerance apparently started as a joke by trolls on the 4chan message board in early 2017, as The Washington Post’s Eli Rosenberg and Abby Ohlheiser reported.

The idea, according to message boards uncovered by BuzzFeed News, was to trigger liberals and trick the media by pretending the widely used hand signal had a secret racist meaning. But as the tongue-in-cheek movement grew, the gesture was appropriated by those who really did use it as a sign of white supremacy.

It’s now become ubiquitous at far-right gatherings, the Southern Poverty Law Center notes, making it nearly impossible to untangle its ironic use from those meaning it as a straightforward slur. That’s actually the idea.

Am I seeing things or is this jack wagon behind Glanville flashing the white supremacy sign? @SarahSpain @BleacherNation pic.twitter.com/6p7d79vIVR