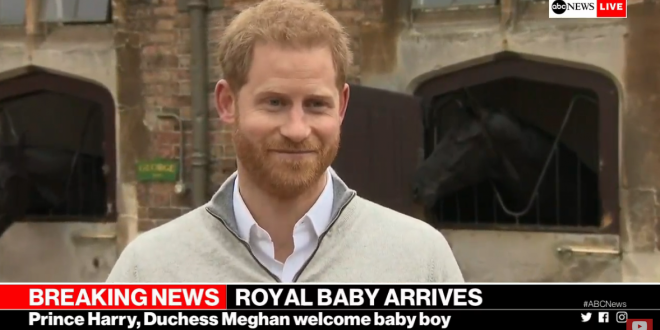 The latest royal baby has arrived. Meghan Markle, who is married to Britain’s Prince Harry, gave birth to the couple’s first child early Monday. The baby boy weighed in at 7 pounds, 3 ounces. His name hasn’t yet been announced.

The baby is “very healthy,” Harry told reporters later in the day, adding that “mother and baby are doing incredibly well.” “It’s been the most amazing experience that I could ever possibly imagine,” the giddy new father said. “How any woman does what they do is beyond comprehension, but we’re both absolutely thrilled.”

Harry and Meghan, the Duke and Duchess of Sussex, have welcomed their first child, a baby boy. https://t.co/SheYRzOhtt

Prince Harry and Megan Markle’s baby is now 7th in line for the British throne. Here’s how the line of succession is shaping up. #RoyalBaby pic.twitter.com/XnuaLZLh94

It’s a boy 💙 Congratulations to The Duke and Duchess of Sussex who have welcomed their first child. #RoyalBaby pic.twitter.com/vqKDIKMxHf