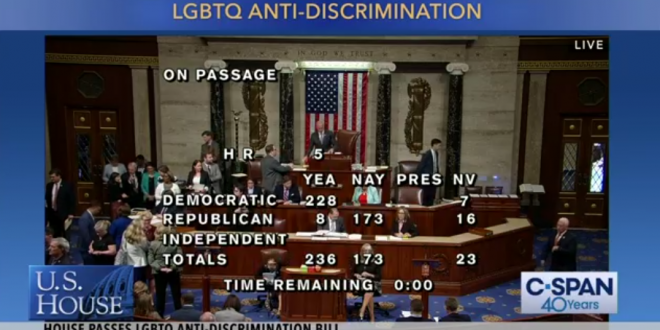 “LGBTQ Americans are one step closer to being protected by federal law instead of living in a country where hard-working Americans in a majority of states can be fired from their jobs, denied housing opportunities, and turned away from other critical services – including access to health care – simply for being who they are. Fairness should never be a partisan political issue, and the Senate should pass this bill without delay,” said Sarah Kate Ellis, President and CEO of GLAAD.

Ellis praised the leadership of Speaker of the House Nancy Pelosi following the vote. “The Equality Act’s passage wouldn’t have been possible without Speaker Pelosi holding the gavel,” Ellis said. “Speaker Pelosi has made full LGBTQ equality under the law a cornerstone of her career, and her leadership today reminds us once more what a staunch ally she is.”

If signed into law, the Equality Act would update the existing Civil Rights Act of 1964 by ushering in across-the-board protections for Americans regardless of sexual orientation or gender identity. This means protections in employment, housing, credit, education, and public accommodations would be guaranteed for LGBTQ Americans under this law.

The bill has virtually no chance of passage in the Senate. The battle will now be just to get McConnell to give it a hearing so we can get GOP hatred on the formal record.

The White House has said that Trump opposes the bill due to its “poison pill” elements, which are presumably its transgender protections.

More than 200 major corporations, 500 statewide and local organizations, a bipartisan consensus in Congress, and 70% of Americans support legislation protecting LGBTQ people from discrimination.

I am proud to stand with them and the other @HRC to support the #EqualityAct.

BREAKING: The House of Representatives has passed the historic #EqualityAct.

It’s the first time a chamber of Congress has approved a comprehensive LGBTQ civil rights bill that would finally provide clear, nationwide protections for LGBTQ people throughout daily life. pic.twitter.com/ObFmVv3woE

Powerful words from @RepKatieHill: “This is 2019 and we are not afraid of the boogeyman that you’re trying to create. We are ready to move forward and tell all of our constituents, all of our communities, all of Americans that they matter equally.” #EqualityAct pic.twitter.com/zJ3A9Vr75y

For far too long, our government has failed to provide our #LGBTQ constituents with the critical #CivilRights and federal protections they need and deserve.

That’s why today, with my brother and his husband in mind, I voted to reject discrimination and pass the #EqualityAct! pic.twitter.com/9v1jg3AKSx

LGBTQ Americans have no protections against discrimination in employment, housing, & other core areas of life in more than half of the United States. Making the #EqualityAct the law of the land is essential to putting things right. Proud to vote today on this important bill. pic.twitter.com/hZtMhhNqFs

For too long, conversations surrounding America’s LGBTQ community have focused on “tolerance.”

But tolerance is a condescending word.

As we pass the #EqualityAct today, we take pride in this community and all they have & will achieve. pic.twitter.com/I53StyYFxK

Previous Christian TV Host: We Will “Push Out Zionism” And Impose Christian Values Whether You Like It Or Not
Next Rep. Jim Jordan Claims Vindication After Revelation That University Knew About Sexually Abusive Doctor