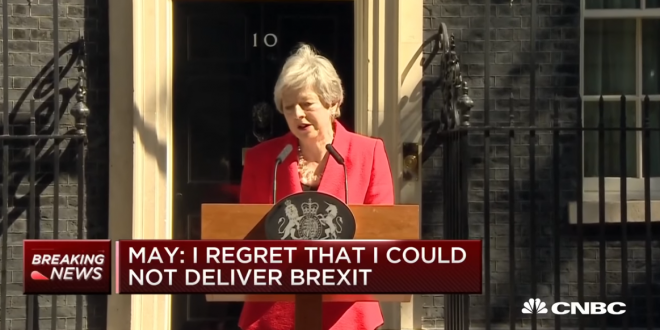 BREAKING: Theresa May To Resign On June 7 [VIDEO]

Theresa May has said she will quit as Conservative leader on 7 June, paving the way for a contest to decide a new prime minister. In an emotional statement, she said she had done her best to deliver Brexit and it was a matter of “deep regret” that she had been unable to do so.

Being prime minister had been the “honour of my life”, she said. Mrs May said she would continue to serve as PM while a Conservative leadership contest takes place.

Boris Johnson, Esther McVey and Rory Stewart have said they intend to run for the party leadership, while more than a dozen others are believed to be seriously considering entering the contest. The prime minister has faced a backlash from her MPs against her latest Brexit plan, which included concessions aimed at attracting cross-party support.

May’s announcement came after a meeting with Graham Brady, the chair of the backbench Tory 1922 Committee, which was prepared to trigger a second vote of no confidence in her leadership if she refused to resign.

Her fate was sealed after a 10-point “new Brexit deal”, announced in a speech on Tuesday, infuriated Tory backbenchers and many of her own cabinet – while falling flat with the Labour MPs it was meant to persuade. The leader of the House of Commons, Andrea Leadsom, resigned on Wednesday, rather than present the Brexit bill to parliament.

The prime minister will remain in Downing Street, to shoulder the blame for what are expected to be dire results for her party from Thursday’s European elections – and to host Donald Trump when he visits.

A tearful Theresa May announces her resignation

A very dignified statement from @theresa_may. Thank you for your stoical service to our country and the Conservative Party. It is now time to follow her urgings: to come together and deliver Brexit.

A very dignified statement from @theresa_may. Thank you for your stoical service to our country and the Conservative Party. It is now time to follow her urgings: to come together and deliver Brexit.

Theresa May’s voice cracked as she said she was honored to serve the country as the “second female prime minister, but certainly not the last,” and said the role had been the honor of her life https://t.co/VjqTYQKfuA