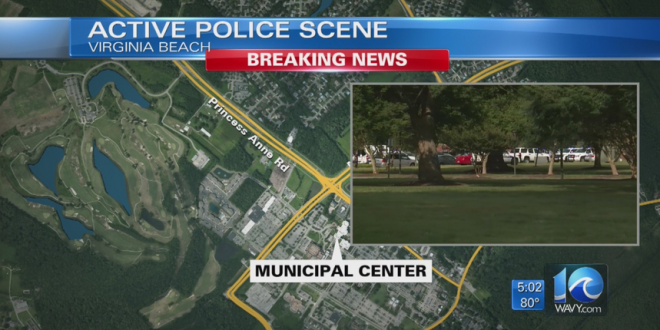 Multiple people were injured by a shooter who has been apprehended at the city’s Municipal Center on Friday afternoon, police said. Master Police Officer Allen Perry confirmed there was a shooter in building 2, which is next door to City Hall. At 4:50 p.m., the Virginia Beach Police Department tweeted that one shooter has been taken into custody and multiple people were injured. Perry said he could not say how many. “We are asking everyone in the Municipal Center to shelter in place,” he said.

City sources told a reporter with WAVY-TV that one person was dead and six were injured. Police say a suspect has been taken into custody after Friday afternoon’s shooting and they believe there was only one shooter. A police spokesman told The Virginian-Pilot that the shooter opened fire in Building 2 of the municipal center. A spokeswoman for the FBI in Norfolk said the bureau is responding to assist Virginia Beach police.

Previous Elton John Is “Ashamed” About Brexit: I’m A European, Not A Stupid, Colonial, Imperialist English Idiot [VIDEO]
Next Trump Backs Boris Johnson For PM Ahead Of UK Visit