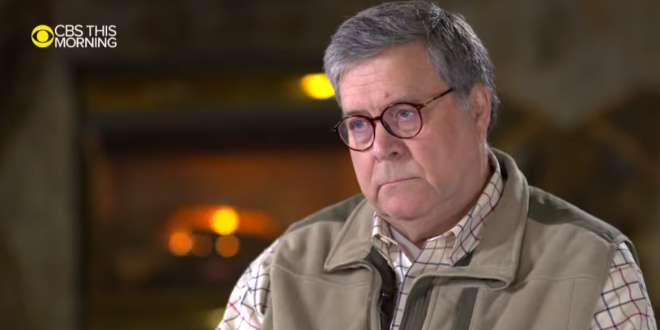 Bill Barr: Mueller Should Have Decided On Obstruction

Attorney General William P. Barr said in an interview broadcast on Thursday that the special counsel, Robert S. Mueller III, should have decided whether his findings about President Trump’s efforts to impede the Russia investigation amounted to criminal activity.

“I personally felt he could have made a decision,” Mr. Barr told CBS News during an interview in Alaska, where he is visiting law enforcement officials. “But he had his reasons for not doing it, which he explained. And I’m not going to, you know, argue about those reasons.”

Mr. Barr reiterated his criticism of Mr. Mueller for his decision not to definitively conclude whether the president obstructed justice in his report that detailed 11 instances in which Mr. Trump tried to derail the special counsel’s work.

The attorney general said he was surprised when Mueller told him he would not decide if the president obstructed justice but said he didn’t press him on it and then, working with Justice Department lawyers, stepped in and made the decision himself based on the evidence Mueller had gathered.

Asked about the fundamental difference between his and Mueller’s views on what the evidence gathered during the Russia probe means, Barr said, “I think Bob said he was not going to engage in the analysis. He was not going to make a determination one way or the other. We analyzed the law and the facts and a group of us spent a lot of time doing that and determined that both as a matter of law, many of the instances would not amount to obstruction.”