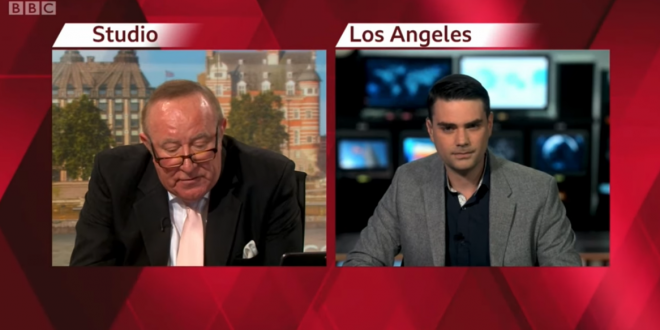 Ben Shapiro Gets Burned By BBC Host, Stalks Off After Ranting “I’m Popular And No One Has Heard Of You”

Ben Shapiro, the right-wing “thinker,” baby Hitler-defender and former toothbrush startup-endorser, rose to fame thanks to his combative, shrill interview style that promised TOTAL DESTRUCTION of any liberal talking point or talking head he encountered.  Unfortunately, as the old saying goes, if you live by the SICK BURN you die by the SICK BURN, and today the wheel of online ownage turned for Ben.

Consider this interview today with BBC presenter Andrew Neil, purportedly about Shapiro’s new book. Neil and Shapiro started to clash when Neil read Shapiro some of his tweets and challenged him on some of the things that he has done and said. Shapiro started out relatively irate, which looked particularly silly in contrast to Neil’s dispassionate, vaguely bemused line of questioning.

“Well, are those videos labeled by me?” Shapiro shot back. “Why are you picking out random YouTube videos put up by people who are not me and then attributing the titles to me?”

The hilarious part doesn’t come from Shapiro’s predictable views about abortion, but rather in his insistence that Andrew Neil is a liberal figure disguised as an objective journalist. In fact, Neil is a famous conservative in the U.K., and is chairman of The Spectator.

He was also the editor of the Sunday Times for a decade, which is a conservative newspaper owned by none other than Fox News mastermind Rupert Murdoch. So as you see, Neil isn’t just a conservative, but a very famous one.

Shortly before he ripped off his microphone and stalked off the set, Shapiro said, “You talk about undermining the public discourse — it seems to me that simply going through and finding lone things that sound bad out of context, and then hitting people with them, is a way for you to make a quick buck on BBC off the fact that I’m popular and no one has ever heard of you.”

Just pre-taped an interview with BBC’s @afneil. As I’m not familiar with him or his work, I misinterpreted his antagonism as political Leftism (he termed the pro-life position in America “barbaric”) – and that was apparently inaccurate. For that, I apologize.

“It is a symptom of America’s stultifying news media. Pundits are so used to having their views echoed back to them in interviews — or only challenged by people who don’t know what they are talking about — that they can’t handle a robust interrogation.” https://t.co/DtK22EAcYm

Remember when you demanded to debate AOC? And then got all mad when she didn’t?

And remember when you just left a BBC interview because the questions were too hard?

YOU GOT DESTROYED, CUCK