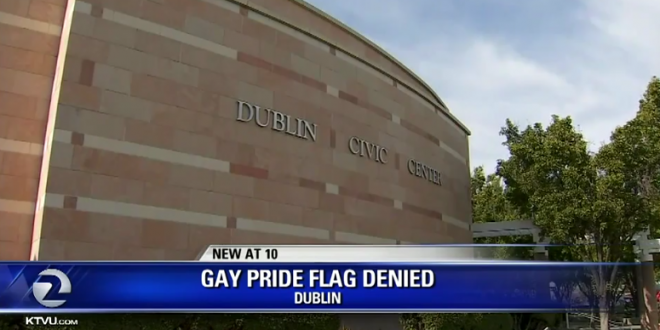 There is strong reaction from the LGBTQ community after a Bay Area city’s controversial decision to not fly the gay pride flag. The East Bay city of Dublin will not fly the rainbow flag over city hall during Pride next month. The decision came after several residents spoke out against the idea.

“If you agree to fly the rainbow flag, can we fly the Confederate flag, the Black Lives Matter flag, a Communist flag?,” said one resident. “At the end of the day, I believe there is another letter that to the end that is being propagated actually at our state capital right now and that is ‘p’ for pedophile,” said another resident.

Mike Grant has been a resident of Dublin for 30 years and owns Guns Unlimited. He brought his NRA flag to the meeting and said it’s not about hate but if the rainbow flag can fly, so should his flag.

In the clip you’ll see that one of the complaining residents is wearing his MAGA hat. Because of course.

Previous Bank CEO Arrested On Charges He Loaned $16M To Manafort In Return For Secretary Of The Army Position
Next Mayor Pete Buttigieg: Trump Pretended To Be Disabled To Dodge The Vietnam Draft, Emanates Racism [VIDEO]