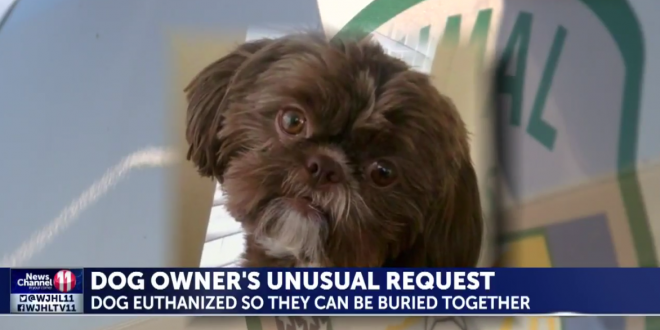 A healthy dog was put to death in Virginia at the behest of its owner, who made the request in her will. The owner of Emma, a Shih Tzu mix, died March 8. Her dog was held at the Chesterfield Animal Shelter before it was picked up March 22 and then euthanized. Heartbroken animal shelter officials said they had no choice but to turn over Emma to the estate executor, even knowing what was going to happen to her.

“We did suggest they could sign the dog over on numerous occasions, because it’s a dog we could easily find a home for and re-home,” Chesterfield Animal Services manager Carrie Jones told WWBT. “Ultimately, they came back in on March 22 and redeemed the dog.” Emma’s owner, Anita Cullop-Thompson, 67, wanted to be interred with her pet, Morrissett Funeral and Cremation Service owner Larry Spiaggi told NBC News.

Emma was then taken to a local veterinarian, euthanized and taken to a pet cremation center in Richmond, Virginia, WWBT reported. Her ashes were placed in an urn and returned to the representative of the woman’s estate. https://t.co/FpC3w90l3l

Can you kill your pet? This is not a hypothetical – here I am with Law Professor and Animal Activist @garylfrancione @SXMPOTUS discussing the woman who demanded that upon her death she be buried with her (healthy) dog: https://t.co/BCZLCGZApd pic.twitter.com/DLKymoahx6

A dog was euthanized for her owner’s dying wish that they be buried together.

“They’re just property…That is the problem. What I’ve been arguing for is that we ought to treat them as persons,” a law professor and animal-rights author tells @smerconish. https://t.co/6aBNxXw8Sj pic.twitter.com/y7fu3qX8vV