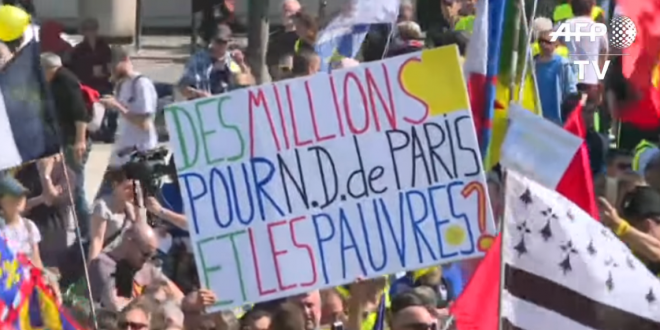 A total of 60,000 police were deployed across France on Saturday as the country prepared for the latest protest by the “gilets jaunes” or Yellow Vest demonstrators. At least 5,000 police were being stationed in Paris alone, as authorities warned protesters to keep away from Notre Dame cathedral and the banks of the Seine. For many Yellow Vest participants, the aftermath of the blaze proved their point about the balance of wealth in France.

Organizers have expressed their consternation that although Notre Dame’s caretakers have been saying for years that they did not have enough funds for repairs, several billionaires announced they would give massive donations only after the fire. “They can mobilize a truckload of cash in one night for Notre Dame,” but they can’t help the poor, said spokeswoman Ingrid Levavasseur.

The Paris police headquarters said authorities detained 126 people by early afternoon and carried out spot checks of more than 11,000 people trying to enter the capital for Saturday’s protests. Police fired tear gas amid tensions at a march of several thousand people from France’s Finance Ministry toward the Place de la Republique plaza in eastern Paris. Barricades were set ablaze at one spot, and branches set on fire elsewhere. Firefighters quickly responded to extinguish the flames.

For the firemen it was Notre Dame Monday now #YellowVests Saturday. pic.twitter.com/PCPS8Ml4uJ

Clashes break out between police and some yellow vest rioters in Paris https://t.co/IkCmqrqd9d pic.twitter.com/pZZQoIJ8r5