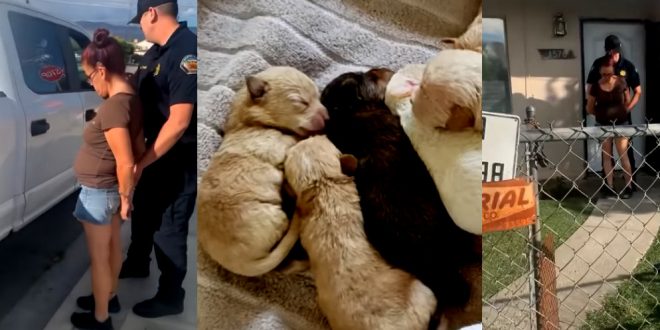 Surveillance video showed a woman get out of a car and drop a bag containing the pups into a dumpster behind an auto parts store on Thursday. Investigators say the bag was sealed and cavalierly tossed into the bin, causing Animal Services to term the case one of “willful act of animal cruelty.”

Authorities said they recovered an additional 30 dogs at the home of the suspect. A Riverside Animal Control official told the radio station that Culwell could face felony charges. The dumped dogs would have died in the heat within an hour if they had not been plucked from the waste bin, authorities said.

Animal Control has been caring for the dogs since taking them in, but will soon hand them off to Southern California-based MeoowzResQ, cat rescue focused on fostering, who will take over caring for the additional puppies and older dogs found at Culwell’s home.

#BREAKING: @helpinRIVcoPETS confirms to @KNX1070 a Coachella woman who is supected of tossing a bag full of #Puppies into a dumpster has been arrested. Approximately 30 additional dogs were found at her home when she was taken into custody. pic.twitter.com/YWWNnUc3tO