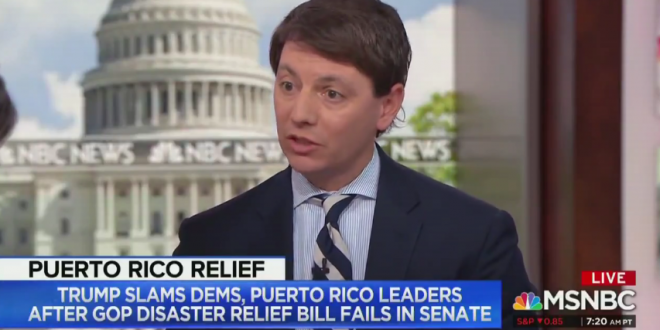 White House spokesman Hogan Gidley twice referred to Puerto Rico as “that country” during a television appearance Tuesday in which he defended a series of tweets by President Trump lashing out at leaders of the U.S. territory.

“With all they’ve done in that country, they’ve had a systematic mismanagement of the goods and services we’ve sent to them,” Gidley said.

“You’ve seen food just rotting in the ports. Their governor has done a horrible job. He’s trying to make political hay in a political year, and he’s trying to find someone to take the blame off of his for not having a grid and not having a good system in that country at all.”

Watch him get his head handed to him in the clip. Oh, and he repeats Trump’s “$91 billion” lie.

White House spox Hogan Gidley refers to Puerto Rico as “that country” on @HallieJackson‘s show. “With all we’ve done in that country, they have systematic mismanagement of the goods and services we’ve sent to them.”
Gidley says later that it was “a slip of the tongue.”