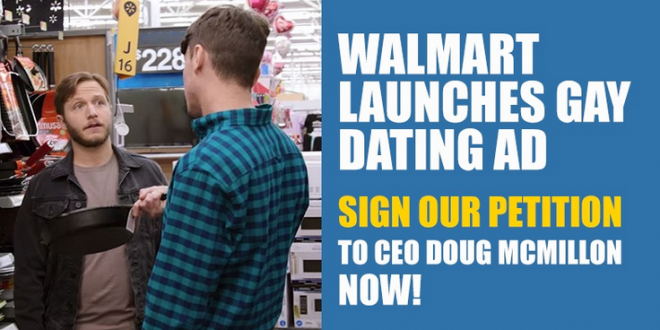 Walmart To Meet One Million Moms Over Gay Dating Ad

One Million Moms has joined our parent ministry, the American Family Association, on this crucial campaign. A few weeks ago, 1MM and AFA requested a meeting with Mr. McMillon on your behalf, but were told he was unavailable to meet with us. However, we were offered a meeting with his representative, and that meeting has now been set for later this month.

These questions remain for Mr. McMillon: Are you aware of the tens of thousands of families who are offended by the ad and have signed our petition to Walmart for its removal?

Have you viewed the ad and read the gay-affirming comments posted by Walmart with some posts accompanied by the rainbow flag?

The appearance here is that Walmart, Inc. has joined the LGBT movement. Is this true or false?

Are you aware that Walmart has only commented on the positive posts on the ad but has completely ignored hundreds expressing objections? Does this mean Walmart does not care about those who have objections and have been offended?

Thousands of families supportive of 1MM – including many of your own customer base – have been offended by the gay-affirming ad. What is your defense of the ad? These families are awaiting a response – and deserve one.

1MM has always maintained that Walmart and other corporations should not take sides by promoting the LGBT social and political agenda. Why has Walmart chosen sides against the traditional definition of family with this ad?