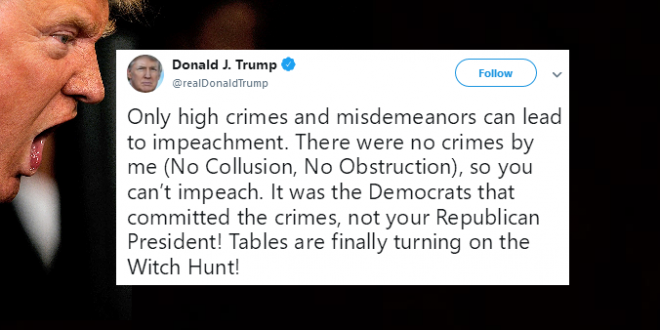 Trump: You Can’t Impeach Me Because I’m Innocent

President Trump on Monday pushed back on the prospect of Democrats launching impeachment proceedings against him, asserting that he did not commit a crime to reach the threshold of “high crimes and misdemeanors.”

It marked the second time in as many days Trump has aimed to diffuse discussion of impeachment as Democrats weigh whether to undertake such proceedings in the wake of special counsel Robert Mueller’s investigation.

Only high crimes and misdemeanors can lead to impeachment. There were no crimes by me (No Collusion, No Obstruction), so you can’t impeach. It was the Democrats that committed the crimes, not your Republican President! Tables are finally turning on the Witch Hunt!