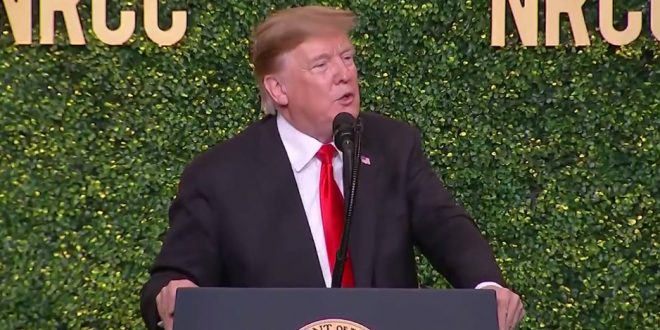 President Trump has long despised wind power. He has repeatedly blamed wind turbines for killing birds (which they do at a lower rate than other energy sources) and for allegedly causing electrical power to halt when the wind stops blowing.

In a speech tonight to House Republicans, Trump claimed that wind turbines cause cancer. “They say the noise causes cancer,” the president of the United States asserted.

Wind turbines do not cause cancer. Some people blame the noise for causing a variety of other health ailments, but these charges have zero scientific validity. Cancer is not caused by noises of any kind.

Trump tells House Rs to be “more paranoid than they are” about elections and implied midterms were rigged.

“Someone’s going to leak this whole damn speech to the media,” Trump tells NRCC in a speech that is being broadcast live by C-SPAN.

TRUMP during NRCC speech: “If you have a windmill anywhere near your house, congratulations, your house just went down 75 percent in value. And they say the noise causes cancer. You tell me that one, okay? Rerrrr rerrrr!” pic.twitter.com/lYmx84Yxk1