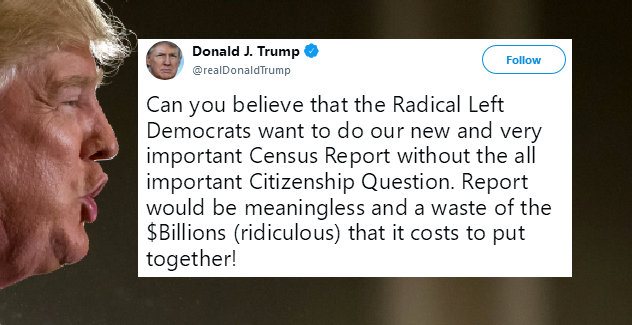 President Donald Trump on Monday said the nation’s 2020 census would be “meaningless” without the inclusion of a controversial citizenship question, wading into the legal fray over the nationwide count. Trump, in a tweet, criticized Democrats over issues surrounding “the all important Citizenship Question” and said the census would be a waste of government funding if the question was dropped.  The Trump administration’s decision to add a citizenship question to the 2020 survey is before the U.S. Supreme Court.

Can you believe that the Radical Left Democrats want to do our new and very important Census Report without the all important Citizenship Question. Report would be meaningless and a waste of the $Billions (ridiculous) that it costs to put together!

Trump’s tweet on the “all important Citizenship Question” that he wants added to the Census to drive down immigrant participation comes just minutes after a critical segment on the controversy from Morning Joe.

The citizenship question was cowritten by “voter fraud” “expert” Kris Kobach and Steve Bannon, who use racist scaremongering to depress the vote among Americans. They’re YOUR rights. #FightForFairMaps https://t.co/ueTjvER9lR

Trump’s 2020 census citizenship question lets Republicans undercount immigrants and minorities and continue to gerrymander their districts. It’s been blocked repeatedly in court thanks to the efforts of the @ACLU and others. #FightForFairMaps https://t.co/hlshmXJtMf