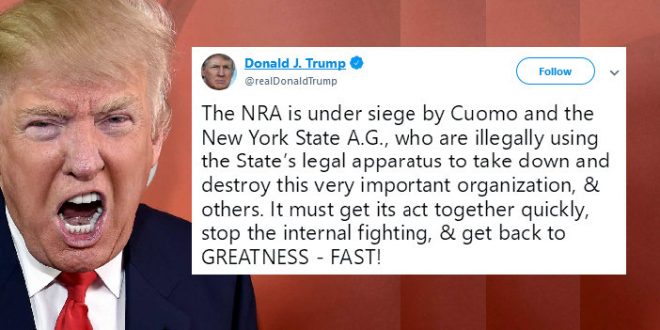 Trump: New York Is Illegally Trying To Destroy The NRA

President Donald Trump on Monday said that the National Rifle Association was “under siege by Cuomo” days after the state’s attorney general began an inquiry into the gun rights lobbying organization. New York Attorney General Letitia James opened an investigation into the group in recent days, NPR reported over the weekend. James confirmed that her office had issued subpoenas but did not provide other details about the investigation.

The NRA is under siege by Cuomo and the New York State A.G., who are illegally using the State’s legal apparatus to take down and destroy this very important organization, & others. It must get its act together quickly, stop the internal fighting, & get back to GREATNESS – FAST!