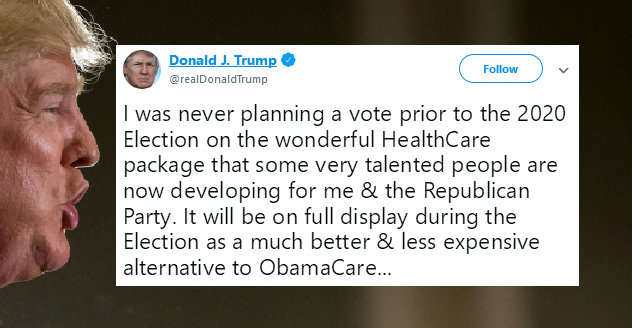 Trump Lies About Pushing For Another Obamacare Vote

President Trump on Wednesday claimed he never wanted Congress to vote on an ObamaCare replacement ahead of the 2020 elections, even though he unexpectedly revived the issue and pushed for swift action just days ago.

The president denied that pressure from Senate Majority Leader Mitch McConnell (R-Ky.) led him to change his plans, even though he announced his decision after speaking with the top GOP senator on Monday.

The president backed off a previous demand earlier this week for Congress to quickly pass a replacement for the Affordable Care Act after McConnell warned him in a private conversation that the upper chamber would not take up the issue ahead of 2020.

I was never planning a vote prior to the 2020 Election on the wonderful HealthCare package that some very talented people are now developing for me & the Republican Party. It will be on full display during the Election as a much better & less expensive alternative to ObamaCare…

…This will be a great campaign issue. I never asked Mitch McConnell for a vote before the Election as has been incorrectly reported (as usual) in the @nytimes, but only after the Election when we take back the House etc. Republicans will always support pre-existing conditions!