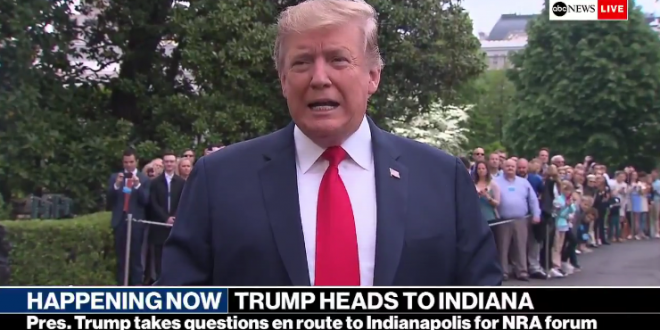 Trump: “I Am So Young, I Am A Young Vibrant Man”

President Trump hit on a range of issues Friday morning before leaving to address the National Rifle Association in Indianapolis. Mr. Trump claimed he’s a student of history and that’s why he never would have ordered former White House counsel Don McGahn. That claim contradicts the Mueller report.

But Mr. Trump is also known for frequently getting key pieces of history wrong.

The president also responded for the first time in person since former Vice President Joe Biden officially launched his campaign. Mr. Trump called himself a “young” and “vibrant” man. Mr. Trump said he’s not so sure about Biden, whom he has coined “sleepy Joe.” “I think we beat him easily,” Mr. Trump said of Biden.

Q: “How old is too old to be president.”

President Trump: “Well I just feel like a young man. I’m so young. I can’t believe it. I’m the youngest person — I am a young vibrant man. I look at Joe, I don’t know about him.” pic.twitter.com/AYcZtA0b5J

“I am a young, vibrant man,” says 72-year-old Donald Trump

Pres. Trump says 2020 Democratic field is “making me look very young, both in terms of age, and I think in terms of energy.”