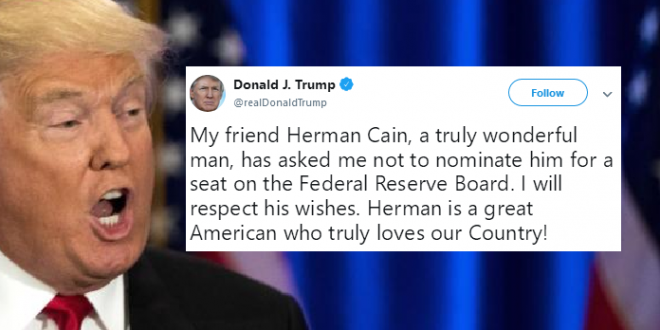 Trump: Herman Cain Asked Me Not To Nominate Him

Herman Cain, President Donald Trump’s pick for a seat on the Federal Reserve Board, frequently acted as a gold company spokesperson on his radio program. He warned listeners in advertisements that they need to put some of their assets in gold because there’s a recession coming and “even central banks are buying gold every year in astronomical amounts. What do they know that you don’t?”

Media Matters previously reported that Cain sent dubious medical information to his mailing list and also sent scammy financial emails that touted now-virtually-worthless penny stocks, pushed a “weird trick” that supposedly “adds up to $1,000 a month to Social Security checks,” and boasted of a “moneymaking strategy” that could “turn $1,000 into $800,000.”

He also sent sponsored emails touting the alleged benefits of investing in precious metals, including a message from a gold company which claimed that a return to the gold standard “could provide the biggest wealth building event of our lifetime.”

My friend Herman Cain, a truly wonderful man, has asked me not to nominate him for a seat on the Federal Reserve Board. I will respect his wishes. Herman is a great American who truly loves our Country!