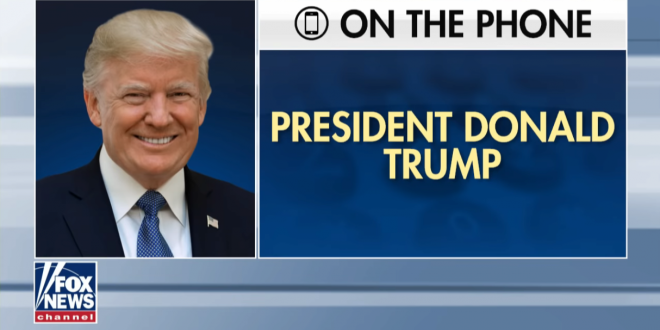 President Donald Trump handicapped the front-running Democratic presidential hopefuls at the end of his interview with Fox News host Sean Hannity on Thursday night. Trump ignored Hannity’s request to be succinct with his summaries and explained at some length why he now calls Biden “Sleepy Joe.”

“He’s not going to be able to do the job,” Trump said. He suggested Sanders had “misguided energy” and “talks a lot, but doesn’t get it done.”

The president also claimed O’Rourke’s popularity was “a fluke” and that Harris has “a little bit of a nasty wit.” Buttigieg, meanwhile, was “not going to make it,” although Trump did say he was “rooting” for Mayor Pete to do well.

During the interview, which was mostly a vent session for Trump about the Russia investigation, he mocked senior senators for supporting Rep. Alexandria Ocasio-Cortez’s Green New Deal, saying they stood “fawning behind her” while she was talking about her vision to combat both climate change and income inequality.

He also took yet another swipe at the late senator John McCain for his famous thumbs-down vote that blocked Republicans from moving forward on repealing key sections of the Affordable Care Act.

A bulk of Trump’s interview with Hannity was spent railing on FBI, Strzok-Page, Clinton and Mueller team; Hannity didn’t ask him about any specific revelations in Mueller report – including the instances detailed in the obstruction section of Trump seeking to undercut the probe

My main takeaway from Trump’s 45 minute interview with Hannity is that I am less confident than ever before that we will have a free and fair election next year.

This Hannity interview tonight is full of stark language from the president, all as a constitutional clash unfolds between the White House and Congress. “This was an attempted overthrow of the United States government,” President Trump says of the Mueller investigation.

Speaking to Hannity about the Russia investigation, Trump accuses the FBI (along with Hillary Clinton?) of plotting a coup against him: “This was a coup. This was an attempted overthrow of the United States government.” pic.twitter.com/MFTIjOFIBY

He’s going to get someone killed with this language. He accused Hillary of trying to overthrow the United States government.

Speaking to Hannity, Trump admits that Attorney General Bill Barr “made a decision right on the spot” that Trump hadn’t obstructed justice.

Donald Trump should be impeached for his Hannity interview alone. He is completely deranged and seemingly trying to spark a civil war in this country.

Previous CHATTER AWAY: Overnight Open Thread
Next Jair Bolsonaro Condemns Gay Tourism To Brazil: But If You Want To Come Have Sex With A Woman, Go For It