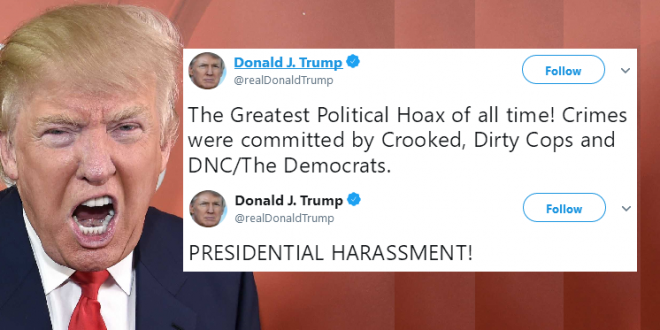 Trump Flips Out Ahead Of Mueller Report Release

Just hours before Robert Mueller’s report is finally released, President Donald Trump once again denounced the probe as a historic “hoax” perpetrated by Democrats and other critics.

The Mueller report is expected to provide more details of the investigation into Trump’s presidential campaign and Russians who sought to influence the 2016 election, as well as claims that Trump may have tried to obstruct the investigation.

Attorney General Bill Barr reported that Mueller did not reach a conclusion on the obstruction of justice question. The attorney general said his office determined there was not sufficient evidence to make a case against Trump.

This morning Trump is also furiously retweeting his usual sycophants. Those tweets are below. Gosh, he seems kind of worried.

The Greatest Political Hoax of all time! Crimes were committed by Crooked, Dirty Cops and DNC/The Democrats.

BREAKING: JW announced today that it filed a FOIA lawsuit against the DOJ for records of communications and payments between the FBI & former British intelligence officer Christopher Steele and his private firm, Orbis Business Intelligence (1/3).https://t.co/OuMuIGgvpf

JW President @TomFitton appeared on “Fox and Friends First” to discuss AG Bill Barr’s testimony and Spygate: They know it’s spying. This is a joint operation between the DNC, the Clinton campaign, the FBI, and DOJ to target President @realDonaldTrump . https://t.co/8gSSNvoOxM pic.twitter.com/6GfTm4rDlg

Judicial Watch announced it received 756 pages of newly uncovered emails that were among the materials former Secretary of State Hillary Clinton tried to delete or destroy, several of which were classified.
https://t.co/INxKemnrax

On “Hannity”, @seanhannity discussed some key findings from Judicial Watch in regards to the Clinton cover-up: “We are finding out even more devastating information about how the deep state protected Hillary Clinton before turning their forces against @realDonaldTrump .” pic.twitter.com/1hduCu3Lvi