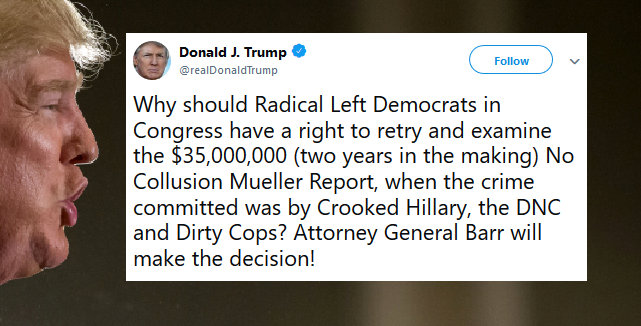 Trump: Democrats Have No Right To See Mueller Report

President Donald Trump on Saturday morning raged at his former presidential rival, Democrats and “dirty cops” in what appears to be an effort to keep special counsel Robert Mueller’s report secret. It’s the second time in two days that Trump has cited the capitalized “Radical Left Democrats” in a Twitter attack where he admitted to considering a plan to bus undocumented immigrants from the US-Mexico border to so-called “sanctuary cities” in an effort to punish those municipalities.

Why should Radical Left Democrats in Congress have a right to retry and examine the $35,000,000 (two years in the making) No Collusion Mueller Report, when the crime committed was by Crooked Hillary, the DNC and Dirty Cops? Attorney General Barr will make the decision!