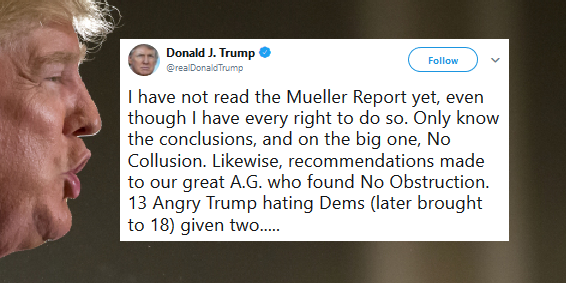 President Trump said Saturday he has not yet read special counsel Robert Mueller’s final report which was delivered to the Justice Department late last month, but said he has “every right to do so” as House Democrats clamor for the document to be released publicly.

Democratic lawmakers have tried five times to pass a House resolution, which says there is “overwhelming public interest” in the government releasing the contents of the high-profile Mueller report.

Sen. Rand Paul (R-Ky.) on Wednesday blocked a resolution calling for Mueller’s report on the Russia probe to be released, marking the fifth time Republicans have blocked the House-passed measure.

I have not read the Mueller Report yet, even though I have every right to do so. Only know the conclusions, and on the big one, No Collusion. Likewise, recommendations made to our great A.G. who found No Obstruction. 13 Angry Trump hating Dems (later brought to 18) given two…..

…..years and $30 million, and they found No Collusion, No Obstruction. But the Democrats, no matter what we give them, will NEVER be satisfied. A total waste of time. As @FrankLuntz has just stated, “Enough, America has had enough. What have you accomplished. Public is fed up.”