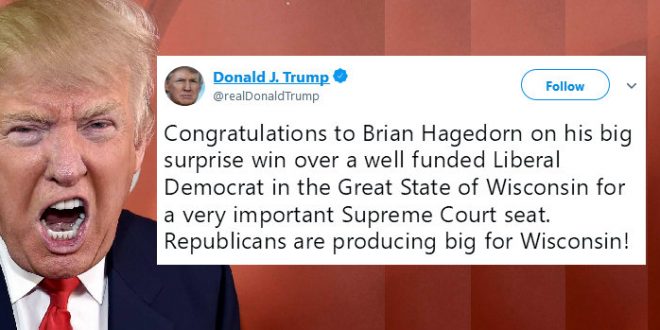 President Donald Trump is congratulating Brian Hagedorn on what the president calls a “big surprise win” in this week’s Wisconsin Supreme Court election.

Hagedorn has about 6,000 more votes than liberal-backed Lisa Neubauer. Hagedorn declared victory, but Neubauer has not conceded and is raising money for a potential recount.

Democratic Gov. Tony Evers declined to say Friday whether he thinks Neubauer should request a recount, saying he has “no advice.” Hagedorn’s lead was about half a percentage point.

Hagedorn was appointed as Scott Walker’s chief legal counsel in 2010. He has written that the legalization of homosexuality will one day lead to the legalization of bestiality and that recognition of gay pride events create a “hostile working environment” for Christians. Hagedorn has delivered multiple paid speeches for Alliance Defending Freedom and in 2016 founded a Christian school that bans teachers, students, and parents from “participating in immoral sexual activity.”

Congratulations to Brian Hagedorn on his big surprise win over a well funded Liberal Democrat in the Great State of Wisconsin for a very important Supreme Court seat. Republicans are producing big for Wisconsin!