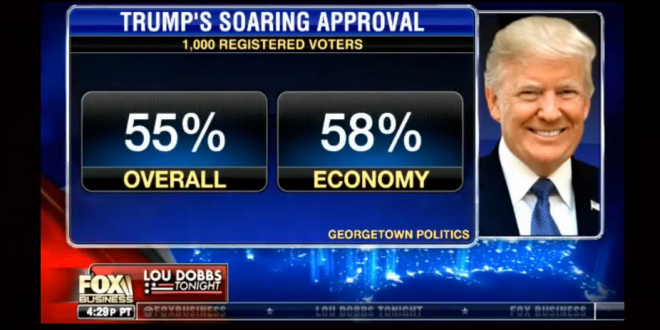 President Donald Trump seemed delighted on Thursday when he posted a screen-shot from Lou Dobbs‘ Fox Business show supposedly showing his approval polling is at 55%.

There’s just one little problem: the number is way off, and his actual approval rating according to that poll is a paltry 43%.

The Fox Business host spent a good portion of his show repeatedly fawning over a new poll from the Georgetown Institute of Politics and Public Service on Trump and the economy.

I’m the Director of @GUPolitics & this graphic is incorrect.

The Battleground Poll shows 58% approval on the economy.

The 55% number is the President’s unfavorable rating. (Only 40% favorable.)https://t.co/a00b6ljiJl https://t.co/nntXuHaUKj