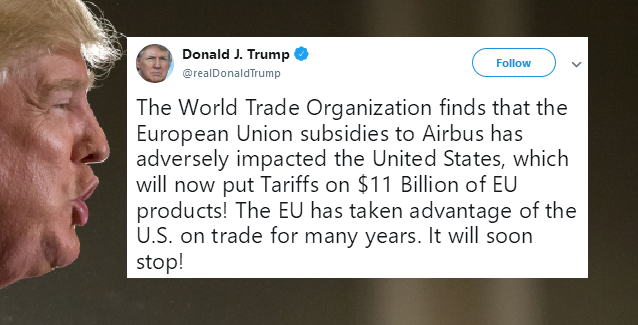 President Trump in an early morning tweet on Tuesday announced that his administration will put tariffs on $11 billion of European Union (EU) products in the wake of a World Trade Organization (WTO) ruling.

The administration late Monday reportedly released a list of about $11 billion worth of EU imports that will be affected by the tariffs as retaliation for EU subsidies to aircraft manufacturer Airbus deemed unfair by the WTO.

The World Trade Organization finds that the European Union subsidies to Airbus has adversely impacted the United States, which will now put Tariffs on $11 Billion of EU products! The EU has taken advantage of the U.S. on trade for many years. It will soon stop!