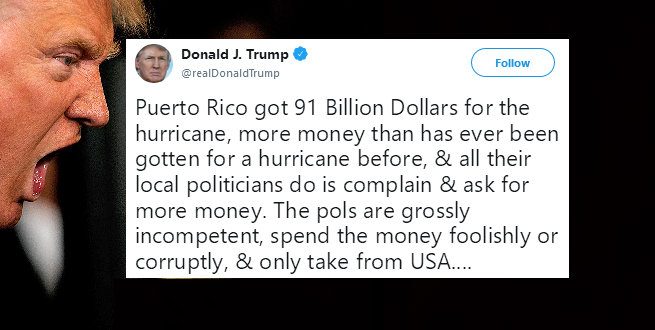 President Trump on Tuesday blasted politicians in Puerto Rico, calling them incompetent while saying the “best thing” that ever happened for the island is “President Donald J. Trump.” Trump has reportedly told senior administration officials that he believes Puerto Rico should not see any more federal aid other than food stamp funding and has reportedly directed aides to find ways to cut funding to the island. “He doesn’t want another single dollar going to the island,” a senior administration official told The Washington Post.

Puerto Rico got 91 Billion Dollars for the hurricane, more money than has ever been gotten for a hurricane before, & all their local politicians do is complain & ask for more money. The pols are grossly incompetent, spend the money foolishly or corruptly, & only take from USA….

….The best thing that ever happened to Puerto Rico is President Donald J. Trump. So many wonderful people, but with such bad Island leadership and with so much money wasted. Cannot continue to hurt our Farmers and States with these massive payments, and so little appreciation!

Reminder: Puerto Rico has not been given $91 billion. This is a long-term (20 year!) estimate of potential liabilities required by law, subject to adjustment and recalculation, and very fuzzy. https://t.co/oaJcvITlpD https://t.co/OqKXOAGgu5

Puerto Rico is the USA. And the island has only received $1.5 billion in aid.

This very stable genius is mixing up the amount of aid given to Puerto Rico with the cost of the damage done by Hurricane Maria. https://t.co/MxCsKiY3Ya

But you can tell Trump has “been gotten” a great Ivy League education.