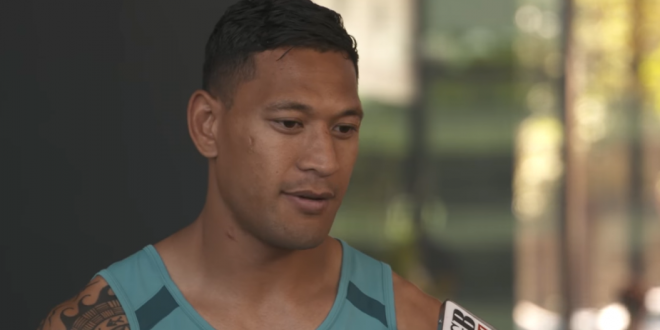 Rugby Australia and NSW Rugby Union will terminate star player Israel Folau’s contract, following his “disrespectful” social media posts about homosexuals. On Wednesday night, Folau took to Instagram to post an image with a warning that “those that are living in Sin will end up in Hell unless you repent” alongside an image telling “homosexuals” to repent.

“Whilst Israel is entitled to his religious beliefs, the way in which he has expressed these beliefs is inconsistent with the values of the sport. We want to make it clear that he does not speak for the game with his recent social media posts,” the joint statement said.

Those that are living in Sin will end up in Hell unless you repent. Jesus Christ loves you and is giving you time to turn away from your sin and come to him. _______________ Now the works of the flesh are manifest, which are these , adultery, fornication, uncleanness, lasciviousness, idolatry, witchcraft, hatred, variance, emulations, wrath, strife, seditions, heresies, envyings, murders, drunkenness, revelings, and such like: of the which I tell you before, as I have also told you in time past, that they which do such things shall not inherit the kingdom of God. Galatians 5:19‭-‬21 KJV _______________ Then Peter said unto them, Repent, and be baptized every one of you in the name of Jesus Christ for the remission of sins, and ye shall receive the gift of the Holy Ghost. Acts 2:38 KJV _______________ And the times of this ignorance God winked at; but now commandeth all men every where to repent: Acts 17:30 KJV _______________