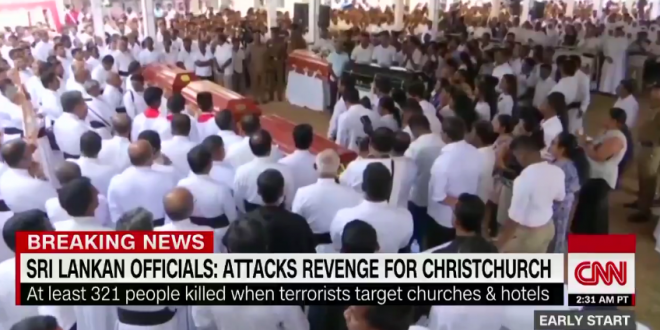 A Sri Lankan government official says coordinated suicide bombings in the island nation on Easter Sunday, which killed more than 320 people, were carried out in retaliation for last month’s mass shooting at mosques in New Zealand.

State minister for defense, Ruwan Wijewardene, said the attacks were carried out by two Islamist organizations. As NPR’s Lauren Frayer reports, “it’s not immediately clear how he knows that – whether the information comes from suspects being interrogated, or evidence the suicide bombers may have left behind.”

One of the organizations is a little-known radical Islamist group named National Thowfeek Jamaath. Health Minister Rajitha Senaratne has called for the top police official to resign after failing to stop the attacks despite receiving reports that the group was planning to target churches.

The Sri Lanka Easter bombings were carried out by a “radical Islam group” in retaliation for the Christchurch mosque attacks, defense minister says.@IvanCNN, live from Negombo, Sri Lanka with the latest.

#BREAKING: ISIS claims responsibility for the Suicide bombings in Sri Lanka which killed 321 on Sunday and injured more than 500. ISIS release statement through their AMAQ News Agency. pic.twitter.com/GiKvcI4hFg