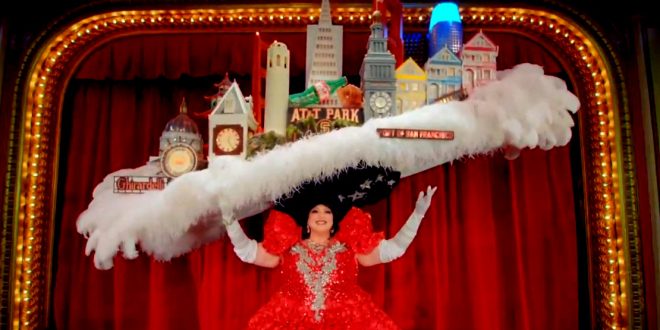 For 45 years, the team at “Beach Blanket Babylon” has donned enormous hats and skewered politics and pop culture in a campy musical revue in a snug North Beach theater. The beloved show has become so ingrained in San Francisco culture that many rank it alongside the Golden Gate Bridge and cable cars.

Though seemingly tireless, the decades-long production will finally come to an end this year, taking its last two curtain calls on New Year’s Eve.

Producer Jo Schuman Silver announced the news to her staff of 85 before curtain on Wednesday, April 17. The show’s ending not for financial reasons, but because Schuman Silver felt that it was time and didn’t feel comfortable handing it off to a successor. She’s run “Beach Blanket” since the 1995 death of Steve Silver, the show’s creator and her husband.

I probably saw Beach Blanket Babylon a dozen times during my six years in San Francisco as it was a reliable treat for visiting friends.

After 45 extraordinary years, Steve Silver’s Beach Blanket Babylon will give its final performances on Tuesday, December 31, 2019.

Thank you to our fans for embracing us since opening June 7, 1974. We so hope to see you all soon! ❤

San Francisco treasure “Beach Blanket Babylon,” the longest-running musical revue on the planet, will come to an end this year after 45 years.https://t.co/ByTjoxsWQr

Beach Blanket Babylon is ending. Take a look back at some of the revue’s most memorable moments. https://t.co/RDYMJoiajr pic.twitter.com/I7r04WXUPA

As “Beach Blanket Babylon” announces it will give its final performance on Dec. 31, here are some moments that helped shape it into a Bay Area icon.https://t.co/K6Drcue5cS

From the archives: “‘Beach Blanket Babylon’ is a very funny, very silly revue scheduled for two more weekends” reads the first Chronicle review of the show on June 19, 1974. Little did they know …https://t.co/EkYf50SNfF