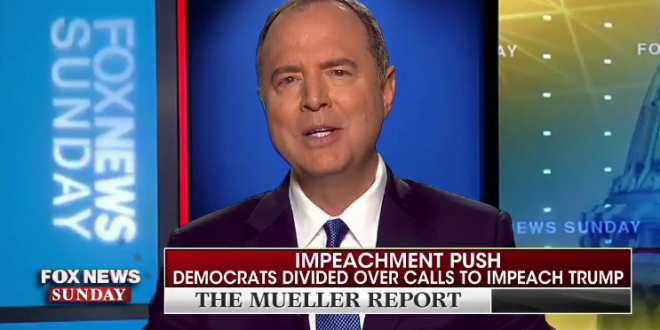 House Democrats will hold a meeting to discuss whether to pursue impeachment proceedings against President Trump, a key lawmaker said Sunday. House Intelligence Committee Chairman Adam B. Schiff (D-Calif.) said on “Fox News Sunday” that the House Democratic caucus will meet in the coming weeks to discuss the matter.

“That’s going to be a very consequential decision and one that I’m going to reserve judgment on until we’ve had a chance to fully deliberate on it,” Schiff said. Democrats have been divided over impeachment since the Thursday release of special counsel Robert S. Mueller III’s report on Russian interference in the 2016 election.

JUST IN: Rep. Adam Schiff tells @MarthaRaddatz congressional Democrats “may” take up impeachment in the wake of special counsel Mueller’s report, and that the decision will be made based on “what is the best thing for the country” https://t.co/A40N3k8AwK pic.twitter.com/DcMQX34k7h

BREAKING: Chairman Schiff says Congress is considering impeachment proceedings against Trump. He said impeachment would likely be unsuccessful due to Republicans helping Trump “no matter how corrupt” his conduct may be. Says Congress may ”undertake an impeachment nonetheless.”

.@RepAdamSchiff talks impeachment and what congress will do now that the full Mueller Report is out pic.twitter.com/1s7D8sQaIR