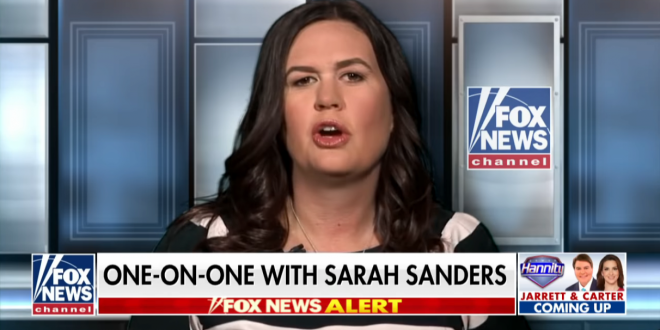 Last night White House press secretary Sarah Sanders ran to Fox News after the Mueller report detailed her confessing to having repeatedly lied to the media. Sean Hannity, of course, gave her a sympathetic ear.

“I guess in the testimony you gave, you had said your FBI — a lot of the FBI people you know were — well, I could tell you. Well, let me put it this way — every FBI rank and file guy, the 99.9 percent I know have all thanked me, because they’re hurt,” Hannity said. “This is the premier law enforcement agency in the world. Just like our intelligence community, same thing. The premier intelligence community in the world, they were hurt by a few at the top, and they’re angry about it, and you said that, but explain.”

“Absolutely. Look, I acknowledge that I had a slip of the tongue when I used the word ‘countless,’ but it’s not untrue,” Sanders said. “And certainly, you just echoed exactly the sentiment and the point that I was making, is that a number of both current and former FBI agents agreed with the president. James Comey was a disgraced leaker who tried to politicize and undermine the very agency he was supposed to run.”

Previous Conway: Excise The Cancer That Is Donald Trump
Next Disobedient Staffers Insulated Trump On Obstruction