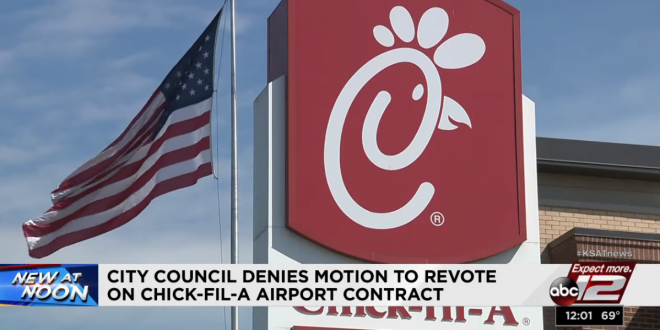 Chick-fil-A has not been cleared for takeoff at the San Antonio International Airport. Nearly a month after the San Antonio City Council voted to ban the fast-food chain from opening a location in the airport, the council narrowly rejected a proposal to reconsider the March 21 decision, Councilman Greg Brockhouse said Thursday.

At the March meeting, council members amended plans for a concessions agreement for new restaurants and businesses in Terminal A of the Texas airport to exclude the chicken restaurant, with some citing concerns with its record on LGBTQ issues.

Brockhouse, who is running for mayor, said in a statement that he asked the council for a revote and to debate the issue, which he says has sent a message that the city doesn’t “respect religious freedom” and has hurt the city’s reputation.

Previous US To Deny Citizenship For Immigrants That Have Ties To Marijuana Industry, Even In States Where It’s Legal
Next PayPal & GoFundMe Cut Off Accounts For New Mexico Militia Accused Of “Arresting” Hundreds Of Migrants