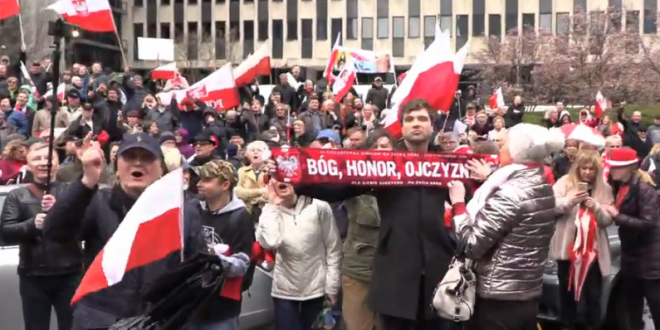 A large group of Polish nationalists took over a major square in downtown Manhattan on Sunday, protesting U.S. legislation that seeks to compensate Holocaust survivors whose property was seized during World War II. The marchers were draped in Polish flags and carried signs opposing bill SS47, which became law in May 2018.

The law calls for the return of property “wrongfully seized or transferred” or “the provision of comparable substitute property or the payment of equitable compensation” for Holocaust survivors and the families of victims.

But bystanders and anti-fascist activists reported that the protesters were not only condemning S447, but also carrying anti-Semitic placards and repeating Holocaust-denial conspiracy theories.

The demonstration comes as there has been considerable pushback from Poland and the Polish government against the historical evidence of Polish participation in the carrying out of the Holocaust in Poland. Last year, Poland passed a law effectively making it illegal to blame Poland or the Polish people for Nazi crimes.

The law passed amid widespread sentiment in the country that Poland has been falsely accused of playing a role in the Holocaust, and its government has insisted that international media not use phrases like “Polish death camp” when referring to Auschwitz, which is in Poland.

There was a Polish nationalist demostration in Foley Square today that denied any Polish complicity with the Holocaust.

One demonstrator waved a dollar bill to taunt Jewish counterprotesters

Here’s one of my photos (of the Polish ultranationalist Holocaust revisionist/denier rally in Manhattan today, if you’re just seeing this thread). pic.twitter.com/tjAUdYfypL