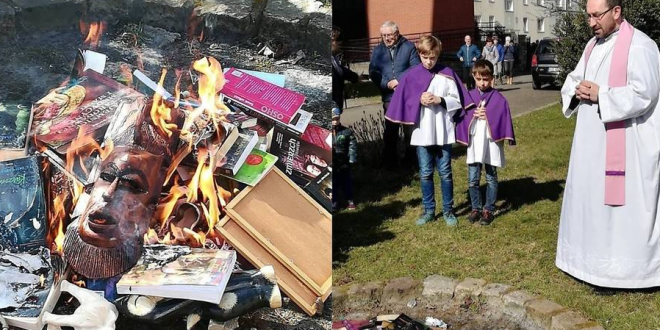 A priest in northern Poland who led a public burning of books that included titles from the “Harry Potter” series and other items parishioners wanted destroyed has apologized, saying the ritual was not intended to condemn specific authors, religions or social groups.

The Rev. Rafal Jarosiewicz called the burning of objects thought to be connected to magic and the occult, and deemed by their owners to be an evil force, “unfortunate.” He published the apology late Tuesday on the Facebook page of a foundation he founded.

Jarosiewicz and other priests have drawn criticism for burning books, Buddhist figurines, an African mask, and other items Sunday outside a Catholic church in the city of Gdansk. They said they encouraged parishioners to bring in things that disturbed them so the priests could do away with bad influences.

Jarosiewicz was fined by city guards. An anti-smog group also contacted prosecutors about the illegal burning of waste in an open fire.

Images from the burning at the Parish of Our Lady Mother of the Church and St. Catherine of Sweden were posted on the SMS z Nieba (SMS from Heaven) foundation, which uses unconventional means to carry out religious work across Poland.

The book-burning attracted attention as Poland’s influential Catholic Church is grappling with revelations about the scale of child sex abuse allegedly committed by pedophile priests.

Previous Mayor Pete Isn’t Sure Trump Is Really A Christian: It’s Hard To See His Actions As Somebody Who Believes
Next Tony Perkins: Nancy Pelosi’s Equality Act Would Make LGBT Citizens “The Most Protected Class In America”