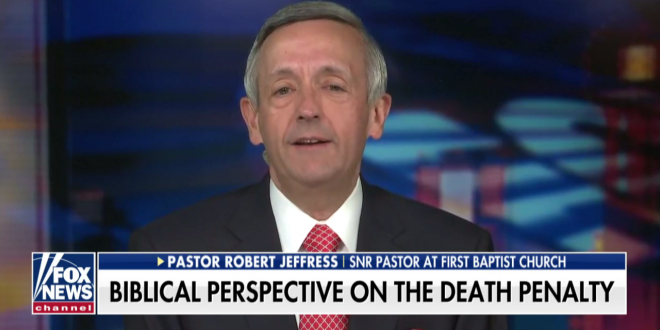 “Let’s admit, the death penalty is sometimes inequitably and even mistakenly applied. We know that. And we ought to do everything we can to prevent that. But I remind people, the greatest example of an innocent person being executed was Jesus Christ himself. He was totally innocent, and yet in spite of that, the New Testament never calls for an end to the death penalty. Instead, Paul said in Romans 13, God has given government the power of the sword, the ability to execute in order to bring punishment against those who do evil.” – Megachurch pastor and Trump cultist Robert Jeffress, on Fox & Friends.

Fox News contributor Robert Jeffress expresses support for the death penalty: Innocent people are executed but so “was Jesus Christ himself” https://t.co/NBrI3zLxKy pic.twitter.com/HQShpASEEt